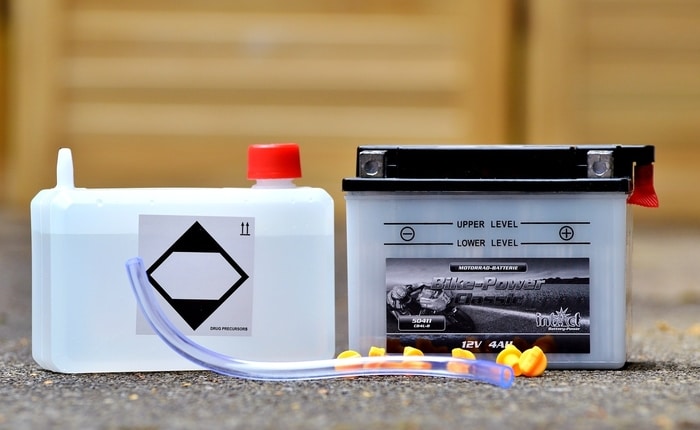 The battery is often neglected during routine motorcycle inspections because it’s well hidden, makes no noise, and is only noticeable when it’s completely dead.

Like all other devices, the battery must be checked at regular intervals to ensure that it is in good working order. Unless it’s a “maintenance free” type, it’s a good idea to take a look at it every week or at least every two weeks.

Electrical failures are indeed those that the biker dreads the most. Yet, the apparent complexity of an electrical schema is misleading. Most circuits can be divided into simpler sections.

The energy source, in principle the battery or the alternator via the battery, supplies a consumer device with a conducting wire. The current returns to the source by a ground wire (usually connected to the frame of the bike) and the circuit is closed.

What is a motorcycle battery?

The battery provides the current necessary for starter operation and ignition during the start-up phase (except in the case where a magnetic flywheel is found, but this is rare).

It also serves as a power reserve for the consumer equipment of the motorcycle whenever the engine is running at too slow a speed for the generator to deliver sufficient current.

The batteries of modern motorcycles are in 12 volts. This is the voltage delivered by the battery. The capacity of the battery is indicated in amp-hours (A / h). Thus, a battery classified 10 A / h can, under certain standardized conditions, charge 10 amps for one hour or 1 ampere for 10 hours.

The majority of motorcycle batteries are of the lead-acid type, but there are more and more gel-type batteries as well.
Gel batteries and lead-acid called “maintenance-free” require, as the name suggests, no maintenance or refreshing liquids. This article therefore deals mainly with so-called “classical” batteries.

A lead-acid battery consists of a series of separate elements contained in a common tank. A 12-volt battery has six.

Each element forms a small separate tray inside the battery. Each element is made of two sets of alternating plates, positive and negative, which are actually grids. Positive plaques are covered with lead peroxide after charging (brown) and negative plates of spongy metallic lead (gray in color).

The positive plates, like the negative plates, are interconnected by jumpers and each set is connected to the outer terminal corresponding to its polarity on the top of the battery.

The elements are filled with a solution of sulfuric acid and water, the electrolyte, containing about 60% water and 40% acid, hence the name “lead-acid battery”.

The battery is an electrochemical generator, a device that transforms the reaction produced by the electrolyte on the plates into electrical energy.

This reaction eventually produces inactive residues that fall to the bottom of the elements in the space under the plates. In addition, the decomposition of water produces a gaseous mixture that escapes from the battery while the acidic solution is concentrated.

Why does a battery discharge?

In normal operation, the battery is charged by the alternator of the motorcycle.
However, it may happen that, under certain conditions of use, the battery runs flat. It must then be removed from the bike and recharged with a specific device (a charger), connected to the home network.

This is often the case with motorcycles used on very short trips during which the generator does not have time to recharge the battery emptied by starter strokes. Either that or when the engine is running at low revs and the alternator fails to compensate by its rate the consumption of the devices which must draw from the battery reserves.

If the motorcycle has not been used for a while, the battery can be discharged because chemical reactions occur constantly in a battery. Even completely disconnected from the circuit, these reactions lead to a slow but complete discharge, also known as self-discharge.

If the battery is in good condition, this self-discharge can reach 1% per day. If your battery is dead after only a few days of inactivity, it is certainly out of order and needs to be replaced urgently.

Another disadvantage of this self-discharge: the lead sulphate that forms on the plates is harder to attack when recharging. Also, when the motorcycle is stopped for a long time, its battery needs to be recharged if the voltage measurement indicates that it is only 50% charged or less than its full capacity. If you neglect this precaution, the formation of a large amount of lead sulphate on the plates will render the battery unusable.

How to test a motorcycle battery

It’s not practical to test the charge of the motorcycle battery by measuring the density of the electrolyte because it doesn’t contain enough liquid to collect with a gravity pipette. Instead, use a voltmeter connected to the extreme terminals of the battery. You can find a solid voltmeter on Amazon for less than $50 that can last for years.

One can sometimes realize visually the charge of the battery. When fully charged, the positive plaques are dark brown in color. If unloaded, they are a lighter brown. Negative plates, gray metal, do not change color depending on the state of charge. Whitish deposits on the plates indicate that the battery needs to be replaced.

In normal operation, the battery loses electrolyte in small quantities either by evaporation or by transformation of the water into hydrogen and oxygen, gases formed during the charge made by the generator of the motorcycle, and evacuated by the vents drums. The battery should not be overfilled, since the excess electrolyte would be evacuated by vents during charging.

The battery terminals should show no signs of corrosion. If this is the case, clean them with fine sandpaper (or emery cloth). The terminals can also be covered with a special grease to protect them. This is an important point because corroded terminals provide poor electrical contact and oppose the flow of current. The start is affected in the first place because the ignition and the starter only depend on the battery until the engine has reached a certain speed.

Make sure that the battery vent is not clogged. Because in that case the gases can not be evacuated. The pressure then increases in the tank in such a proportion that it can crack. Batteries have been known to explode as a result of an accumulation of pressurized gas in the tank.

Check that the tray is not cracked. Signs of whitish corrosion on the battery holder indicate that the battery has leaked. If the motorcycle fell out of its stand, it’s possible that the battery tray was broken, even though the rest of your motorcycle didn’t sustain any damage. Most batteries are held by an elastic strap. Check its condition and positioning as well.

One of the most common causes of cracks in the battery trays is a broken or improperly mounted strap. Also check the rubber blocks on the bottom of the battery holder and make sure they are in good condition.

Finally, be very careful when handling a battery so that the electrolyte does not come into contact with your skin. Sulfuric acid, even diluted, can cause very unpleasant burns. In this case, wash immediately with running water for several minutes. If electrolyte gets into your eyes, wash them immediately with running water and consult a doctor as soon as possible. Sulfuric acid can make you blind.

This video provides a solid demonstration of motorcycle battery testing:

How to recharge the battery

Check that the connection is correct (+ to + and – to -) and that the clamps give a good contact.
On a conventional battery, unscrew the caps closing the elements to ensure aeration.

Accuracy: on newer BMW motorcycles, it’s possible to recharge the gel battery without disassembling it. This is done by connecting a specific charger directly to one of the on-board sockets. For others, it’s necessary to disassemble the battery.

Plug in the charger and leave the battery charge for a few hours (or overnight). It requires a motorcycle specific charger with an intensity of the order of a tenth of the capacity (in amps / hour) of the battery. Under these conditions, a complete slow charge takes about ten hours.

The benchmark in this area is the Tecmate Optimate (available on Amazon), a “smart charger” capable of detecting the charge level of the battery and adjusting the charging intensity accordingly.

This charger is suitable for any 12V acid-lead battery with a capacity of 2.5 to 18 Ah, including “MF” type dry start batteries (either dry charged or wet MF type, already filled and loaded in factories), for motorcycles and similar vehicles but also for gel-type sealed batteries.

If replacing the battery, make sure that the capacity (Ah) is the same.

Charging the battery gives rise to the production of an explosive gas mixture. To avoid an accident, never smoke near a charging battery (choose a ventilated place) and do not make sparks.

Important point: it’s not recommended to regularly charge a motorcycle battery on a car charger. It delivers too much power, calibrated for car batteries that are much more powerful than those for motorcycles. Both are certainly 12 volts, but with a different intensity.

Or it should ideally use a charger that recharges slowly, with an intensity of the order of a tenth of the capacity (in amperes / hour) of the battery.

Slow charging prevents the inner plates from deforming and degrading. Charging too fast with a car charger will shorten the life of the motorcycle battery. But this is still possible in extreme situations.

You may find this video demonstration of battery charging helpful as well:

After checking the battery, also perform a quick check of the lamps. Don’t forget to check the brake light too.

Regardless of the regulatory aspect, failing lamps can cause a fatal accident. It is prudent to always carry with you spare bulbs for the front, rear and turn signals.

Finally, check the operation of the alarm. The importance of a piece of equipment can not be measured enough until an emergency situation strikes.

In Conclusion: How to Test, Charge and Maintain a Motorcycle Battery

A motorcycle battery is an integral part of your two wheeler, but so many of us take this piece of equipment for granted. It’s important to regularly check for damage and recharge when necessary. Use a digital voltmeter to test the battery.

If it requires recharging, you’ll need a charger to do it. And since we live in a time of great technological inventions, make sure to use a smart charger like the before-mentioned Tecmate Optimate so that your battery doesn’t get overcharged.

I’m confident that if you follow the steps outlined in this article, your motorcycle battery will never run out of luck.